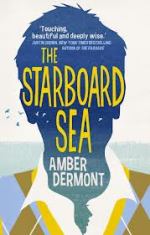 The Starboard Sea by Amber Dermont has been out for a year in hardcover and has just made an appearance in paperback. I am embarrassed to say that it has taken me this long to get to it, but that’s what happens when you have an ever growing To Be Read list. I also have to admit that I read the UK version, which makes no difference but I think it has a better cover.

I have admitted my love of the boarding school novel before so it should come as no surprise that the reason I was originally drawn to The Starboard Sea was because it is set in an elite New England boarding school. It also received great reviews all over the place. These reviews are certainly warranted, but it does feel like a first novel. For some reason, it seems to me that a lot of teenage angst and tragedy tend to get thrown into first novels.

The angst begins when Jason Prosper has to transfer to Bellingham Academy for his senior year after Cal, his best friend and roommate, commits suicide. Like layers of an onion, as the story proceeds we learn more about the events leading up to Cal’s death and what may have precipitated it. Tragedy begets tragedy, and as the story proceeds Jason encounters more adversity. This is where the story becomes a little too much for me. There is just too much that happens to Jason. Not only that, he blames himself for most of it.

Now I’ve made it sound like The Starboard Sea is a sad or depressing tale, which it is not. It is a coming of age story and is a genuinely enjoyable read. I look forward to reading more by Dermont in the future.

Who would like this book? The heart of the story lies in male friendships and for that reason I think The Starboard Sea can easily be recommended to men (though women would also enjoy ita0 . A large component of the novel also has to do with sailing, which Dermont writes about masterfully. I would recommend it along side other boarding school novels, though A Separate Peace by John Knowles stands out as a particularly good companion piece since both deal with male friendships and untimely deaths.