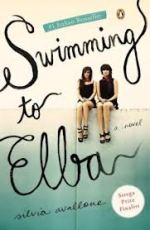 As I’ve mentioned before, I don’t often read books in translation. I’m kind of suspicious of them. Like The Dinner, Swimming to Elba by Silvia Avallone should put those suspicions to rest. It makes sense really, only the best books in a foreign language are going to be translated into English. Like The Dinner, Swimming to Elba was one of the best novels I’ve read this year. Having said that, I should also warn you that Swimming to Elba will not be to everyone’s taste. It is edgy, gritty and sexually charged. It is tragic and heartbreaking. In spite of this, I was unable to put it down.

The story focuses on two teenage best friends growing up in a working class factory settlement on the coast of Italy. They are at an age when they are discovering the power their bodies can have on members of the opposite sex. This power does not go unnoticed by Francesca’s father, who spends his days peering at them through his binoculars in what can only be described as a predatory way. Over the course of the novel the girls make different choices and drift away from one another.

Swimming to Elba has been described as both graphic and defiant, characterizations that I agree with. The novel is suffused with a feeling of discomfort surrounding the girls’ sexuality. Most of this surrounds their young age and therefore innocence, which is contrasted with their knowledge that it is their looks that will bring them escape from the drudgery of daily life. They willingly and deliberately put themselves on display and yet, there is still something very predatory about them boys and men watching them.

The writing style of Swimming to Elba is exquisite. First time novelist Avallone slips back and forth from one perspective to another almost seamlessly. Her changes in perspective flow into one another the way one wave melds into the next. Without Avallone’s brilliant writing, Swimming to Elba may have been filed away as just another coming of age story.

Who would like this book? This book is not going to be to everyone’s taste and is certainly not for the faint of heart. There is no doubt that Avallone is pushing the boundaries and taking you to a place that is uncomfortable. There is overt sexuality, abuse, drug use, crime and death. But for all of that, it is not a depressing story, though perhaps it should be. It gives a straight up view of working class life in Italy and for that it is an insightful and important work. I have a hard time finding another book to compare it to, though Lullabies for Little Criminals may do the trick. Both are edgy and expose a side of the world that is not always pleasant but is nonetheless true.