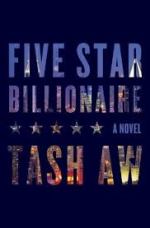 Tash Aw  is one of those writers who I really want to like. I get really excited when I see that he has a new book out, but while I’m reading it I always feel let down. That is not to say that he isn’t a great writer, it’s more that as a writer he and I don’t quite get each other.

His latest novel, Five Star Billionaire, seems to fall into a group with a few other new novels about rich Asians, namely Mohsin Hamid’s How to Get Filthy Rich in Rising Asia and Kevin Kwan’s Crazy Rich Asians. Two are put forth as quasi self help books, two deal with the very, very rich and all three of them became muddled together in my head.

Basically, Five Star Billionaire focuses on five individuals: Gary, a pop star, Justin a fallen scion of the filthy rich, Walter a self help writing crook, Pheobe a small town girl and a successful business woman from a well off background. Each chapter is told from one of their points of view and before long we see that their lives are intertwined in spite of the different worlds in which they inhabit. They are all tied together as Malaysians of Chinese descent trying to make a go of success in Shanghai.

Like other books I have read lately, the most interesting part of Five Star Billionaire was its depiction of new China. Hour of the Rat gave a taste of what life is like in the new factory economies, particularly for ‘factory girls’. Five Star Billionaire is about those who make it a step above ‘factory girls’ into the heart of the riches of new China in Shanghai. This is the world of fast deals, corruption and money changing hands. No one is what they appear, and everyone appears to be after more money.

Overall, I can’t say that I really enjoyed the novel. I found the female characters the most compelling, but the men somewhat flat. Once the various story lines started to cross over and intertwine I was hoping for more, but the intertwining seemed to come to very little. I wanted some great, grand finale where everything works out for everyone, but that was not to be.

Who would like this book? I would like to stress that even though I did not particularly enjoy Five Star Billionaire, it does not mean that others won’t. Tash Aw is a highly praised and award winning writer with a solid fan base. I think in this book Aw is trying to pose a significant political commentary on the plight of overseas Chinese in the new China. It may be because of my own ignorance on the topic that this did not come through as clearly as it could have. Five Star Billionaire does give insight into the rising economic force of the new Asia. Given the population that entails, I think it is important for all of us to gain a better understanding of the situation.