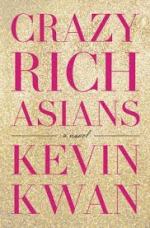 There has been a lot in the media about Kevin Kwan‘s first novel Crazy Rich Asians. I started hearing about it months before it was published. Sometimes media hype is a good thing, and sometimes a bad thing as it unreasonably builds up my expectations. In this case I would say the media hype has been dead on. Crazy Rich Asians is a delightful read that is both humorous and insightful. Without a doubt it is is a great summer read.

Kwan’s novel is set among the super rich of Singapore’s Chinese community. This set is closely knit, perhaps a bit xenophobic and extremely elitist. It is not just who you know, but also how much money you have that counts. Into this pool of sharks Nick brings his American Born Chinese girlfriend who has not been informed of Nick’s moneyed background. Needless to say the elite do not want to let this insider in and let one their prime bachelors go to a nobody. Private jets and exclusive resorts, as well as Asia’s biggest wedding of the year, are complicit in making Rachel feel as though she does not belong.

Crazy Rich Asians is the perfect title for Kwan’s novel, because that is precisely what these people are. They exist in a world that the rest of us get fleeting glimpses of, but do not properly inhabit (unless of course, you are crazy, rich and Asian). Many of the characters are mere stereotypes but because of Kwan’s biting humor and insight this is alright. Sometimes for satire to be effective you need the stereotypes. My one complaint might be that there were too many characters to keep straight, but in the end the details of the individual did not matter so much as what they represented.

Who would like this book? This novel is meant for those who enjoy a humorous commentary on a sector of society that I previously had little exposure to. These are the new rich and the jet set. There are a number of different story lines, but I was invested in the outcome of each one. I stayed up far too late on more than one occasion in an attempt to find out what would happen. In addition to being a commentary on the super rich, Kwan’s novel also delves into what people will do when there is a perceived threat from outsiders. Overall, i recommend: read it and enjoy it.