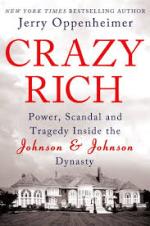 When I picked up Crazy Rich by Jerry Oppenheimer I knew it was going to be a salacious and scandal filled read. That seems to be what Oppenheimer specializes in: unauthorized biographies of the rich and famous (the Clintons, Martha Stewart and Anna Wintour to name a few). Crazy Rich recounts the rise and multiple falls of the Johnson family of Johnson & Johnsons fame. Yes, this is a book about band-aid magnates. Or to put it another way, it is a book about rich kids gone bad.

The early years of the Johnson Dynasty pass as one might expect. Brothers from poor, immigrant roots make good through hard work and intelligence. But things start to get more exciting with the second, third and burgeoning fourth generation of this famous family. When I say exciting, I mean scandalous. This large family is filled with multiple marriages and messy divorces, untimely and tragic deaths, and reckless spending, partying and drug use. On more than one occasion, Oppenheimer draws apt comparisons to the Kennedy family.

So for a book filled with so much exciting material that should make you want to turn the page, Crazy Rich was a bit more of a slog than I anticipated. It felt like it was written on an (unmanageable) deadline. Although I wasn’t expecting a work of great literary merit, the sentences that filled the book were long and cumbersome to the point of being nonsensical. I did not know that using that many subordinate clauses was even legal! Beyond that the narration was meandering.

Who would like this book? I can imagine business people reading Crazy Rich on their daily commutes into the various business metropolises where they work. This gives another side of the story of one of the great family run business empires of American. It also a story about a couple of brothers who made good and how their descendants turned much of it bad. The later half of the book may be of interest to people who enjoy tabloid fodder – and let’s face it, we all read the headlines while waiting in line at the grocery store. The Johnson family have important connections to Kirk and Michael Douglas, Paris and Nikki Hilton and the New York Jets, to name just a few. I suspect that there are better books out there about the Johnson and Johnson corporation, but this one focuses on the dirt.

* This book was provided to me by the publisher via NetGalley in exchange for a fair and unbiased review.