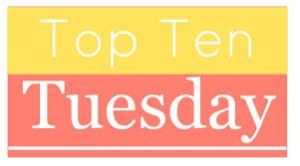 I don’t often participate in memes, but when I do it is usually for Top Ten Tuesday hosted by The Broke and The Bookish.

1. Under the Wide and Starry Sky by Nancy Horan. I like books about real people. This one is about Robert Louis Stevenson and his love affair with an American divorcee. Do I smell a little scandal? Also, I really liked Horan last novel Loving Frank, about Frank Lloyd Wright.

2. Local Customs by Audrey Thomas. Thomas is one of Canada’s best (under-rated) writers and it has been a long time since she’s had a new book. Local Customs is also based on real life characters – the Governor of an African colony and the mysterious death of his poet wife.

4. The Setting Sun by Bart Moore-Gilbert. Moore-Gilbert is a South Asian historian whose stuff I read quite a bit of when I was in grad school. In this book he examines his family’s colonial past and the unwanted secrets that emerge. I can’t wait.

Okay, so that’s only five books, but maybe you can suggest five more that I should be dying to read!