Aye, tis once again Robbie Burns night. Last year to celebrate I did a brief round up of the Scottish literature I had read since moving to Edinburgh. This year I’ll continue the tradition in grand style because I have actually read – and enjoyed – a fair bit of Scottish literature in the past year. 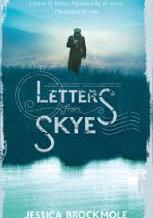 Letters from Skye by Jessica Brockmole. Ok, I’ve let a few great books like this one slip in because they are set in Scotland, though not necessarily by a Scot. Brockmole wrote this book while visiting Scotland from her native America. And besides, there is nothing more Scottish than the Isle of Skye.

The Panopticon by Jenni Fagan. Fagan’s use of language in this novel is exquisite. She fills the dialogues with a beautiful mixture of Scots and English that highlights the (many) differences in the two languages. I cannae recommend this book highly enough.

Closed Doors by Lisa O’Donnell. Like The Panopticon, O’Donnell gives us a slice of Scottish life that you will not find in the books of Alexander McCall Smith. Set on a small island off the coast of Scotland, O’Donnell looks at small town life and family through the lens of a young boy. This book might not be as well known as her The Death of Bees, which i still haven’t read, but it does showcase he writing abilities.

Under the Wide and Starry Sky by Nancy Horan. Again another book written by an American, but a more Scottish subject you’d be hard pressed to find. Horan recounts the life of that venerable man of letters, Robert Louis Stevenson. Although he traveled the world quite extensively his language and sensibilities remain thoroughly Scottish throughout his life.

The Missing Shade of Blue by Jennie Erdal. I read this book quite recently and have not yet had time to post a review. It is about a French translator who has come to Edinburgh to work on a translation of David Hume, one of Scotland’s famous philosophers.

Have you read any Scottish literature lately? What are your favorites?