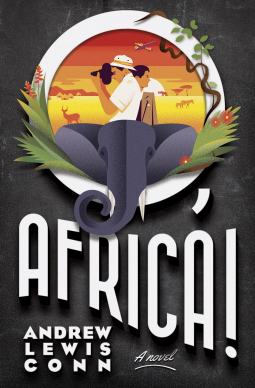 Yet again, I should have read the blurb more carefully when I picked this book. True, O, Africa by Andrew Lewis Conn is partially set in Africa in the 1920’s, but it was still not what I’d envisioned (ie/ Out of Africa). I should have read the comparisons to Chabon’s Cavalier and Clay and Doctorow’s Ragtime to know that this was not the book for me.

O, Africa is set in the declining days of silent films. Through various circumstances, film-making brothers Micha and Izzy are pushed into going to ‘darkest Africa’ to shoot some stock footage and perhaps a feature film. The predictable antics ensue. I was, however, impressed with the varied ways in which Conn addresses the issue of race. He did not fall into the trap of looking at race as a monolithic entity. There were many layers and nuances to his interpretation.

In spite of the fact that I did not really like O, Africa, I was impressed with Conn’s writing. Themes and symbolism abound in this novel. In particular, I loved the way in which Conn dealt with the idea of time, photography and film making. He quite correctly observes that just in the act of filming something you somehow change it. This idea creeps up again and again throughout the novel and is looked at in different ways.

Who would like this book? For me, more than anything, it was the setting that put me off this book. As a reader setting is very important to me and the world of 1920s gangsters and movie makers does not do it for me. But if that is your bag, by all means go for O, Africa. I also think it would make a good book club pick, if your book club is the sort that likes to discuss symbolism and meaning. Conn  is a very talented writer and I will be waiting to see what he produces next.

I received this book from the publisher via NetGalley in exchange for an honest review.