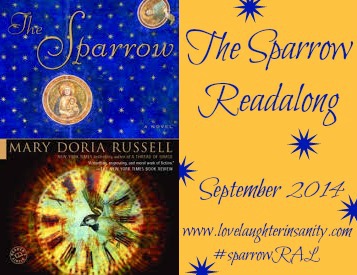 I want to thank Trish at Love, Laughter, and A Touch of Insanity for organizing The Sparrow read-a-long. It gave me the opportunity to read this book that I’ve heard so much about in the past year, but had yet to read. In fair warning to all of you, I finished the book over the weekend – I literally couldn’t put it down – but this post will be entirely spoiler free.

There are a number of things that crossed my mind while reading The Sparrow by Maria Doria Russell. Here we go:

I have much more to say about The Sparrow, but I don’t want to ruin anything for anyone. I would love to hear from anyone can remember the reception this book received when it came out, and who read it at that time.