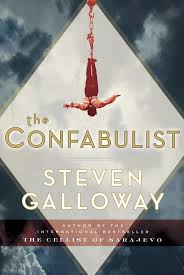 It’s getting to that time of the year when you’re seeing a lot of “Best Books” lists, and you’ll likely see The Confabulist by Steven Galloway on quite a few of them. I was a little hesitant about reading this book since I was not a huge fan of his previous book, The Cellist of Sarajevo. It was a little too brooding for my taste. By way of contrast, The Confabulist is anything but moody and brooding.

The Confabulist is about the life, and sudden death, of Harry Houdini, so you pretty much know that it is going to be fascinating. And it is. But part of what makes The Confabulist such an enjoyable read is the way Galloway weaves the story as a mystery, a story of espionage and a thwarted romance.

Previously when I thought of Houdini I only thought of him as a magical escape artist. But his influence spread much beyond that into the world of international relations and espionage. In particular, I was interested in his interactions with both the Czar in Russia and Arthur Conan Doyle.

Who would like this book? I’m struggling to find anyone who would not like The Confabulist. It’s just that good. I’ve been in a pretty bad reading slump of late, but The Confabulist did wonders to break it. In particular, however, I would recommend it to those who are interested in the rise of spiritualism in the years following World War One. From that point of view it reminded me a fair bit of The Dark by Claire Mulligan.

And be sure to enter my Second Anniversary giveaway if you haven’t already!