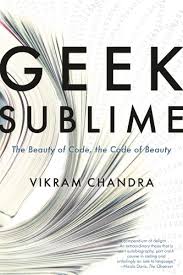 I don’t even know where to start with talking about Geek Sublime. Vikram Chandra has long been a favorite author of mine, so I knew I was going to read this before I even knew what it was about. Then I found out that it was about computer coding and Sanskrit poetics and I was hooked.

My mom is an ex-programmer of the old school and my husband spends much of his time tinkering with code. And then the weird part, I’m a bit of an expert in Sanskrit poetics. Could this be the book that could make me understand my mom’s and husband’s obsessions with code? Who knew such a thing could exist.

Overall, I loved Geek Sublime, right down to the subtitle of the North American version: The Beauty of Code and the Code of Beauty. Chandra’s explanation of code and the history of coding was fascinating, as were the sociological differences he highlighted between coding in India and the US. Then the parallels between FORTRAN and Panini’s Sanskrit grammar – don’t even get me started.

However, I’ll admit that I was kind of bored by his long explanations of Abhinavgutpa’s theory of Sanskrit poetics. Was that because half my Master’s thesis was on this very topic? Or would others be equally numbed by the detailed explanation? If you’ve read Geek Sublime, let me know.

The one thing that I wasn’t expecting out of this book was how deeply personal it was. In addition to coding and Sanskrit, Geek Sublime gets to the heart of Chandra as a writer. I feel compelled to go back and read his debut novel Red Earth, Pouring Rain now that I’ve read Geek Sublime.

Who would like this book? I may be too close to the various topics of Geek Sublime to accurately assess who would like it, but it seems like a natural for coders with a penchant for grammar and language or a distinctly poetic streak. I’d also recommend it to lovers of comparative literature and languages. Beyond that, I’m pretty sure it is unlike most other books I’ve read.