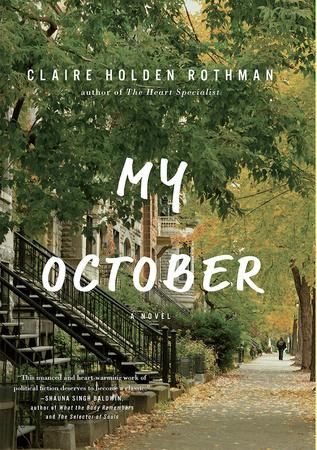 My October by Claire Holden Rothman is what CanLit should be. It is a gripping story that is utterly Canadian. But more importantly, it made me think about Canada’s recent political history and the on-going legacy of Quebec Nationalism.

But that doesn’t really give you a sense of what the novel is like. Luc is an highly acclaimed novelist and the voice of his generation of Quebec separatists. He is a franco-Montrealer and adamant in his language politics. He is also married to an Anglo from a prominent Anglo family. The story is largely set in 2001 as their son grapples with his identity in a new age of politics and personal teenage angst.

I don’t want to say more than that because I don’t want to give too much away. I do think My October should be taught in schools. It shows so clearly the on-going legacy of the FLQ crisis in 1968 and the Anglo flight to Toronto, something that I haven’t given much thought to in recent years.

Who would like this book? Rothman is a very good writer, as her Giller and Governor General Award nominations attest to. So My October is a win for lovers of CanLit. It is also a great coming of age story and will appeal to wider audiences (I’m looking at The Paperback Princess here). But for anyone interested in the changing place of Quebec in Canada, My October is a must. It made me reconsider issues I have not thought about in a long time. It also made me feel truly Canadian.