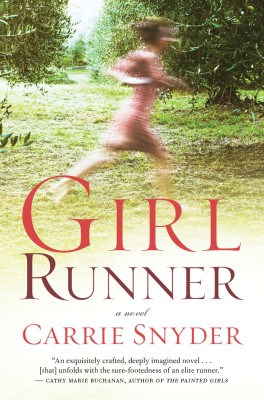 I picked up Girl Runner by Carrie Snyder because I was looking for some running inspiration. I’m not sure if it did the trick – I spent most of the afternoon on the couch reading! I assumed Girl Runner was going to be an inspirational running story. I was wrong. It is so much more than that.

I thought Girl Runner was going to be a simple story set in the 1920s about a girl who was born to run and had to fight her way to gain the right to race, recognition and fame. You know, passion driving her forward every step of the way. And there is some of that, but Girl Runner is, in fact, a far more complex novel.

Much of the story is about being an independent woman before woman’s rights took hold. Our protagonist, Aggie, makes it to Toronto, following in her siblings footsteps, becomes an Olympic athlete and battles the subtleties of sexist morays of the first half of the 20th century when it comes to sexuality, living alone and joining a profession.

But the true brilliance of Girl Runner is in the writing and the way the story is told. Bits and pieces of Aggie’s past come to us as the octogenarian reviews her life. A little of her childhood and family life, followed by bits of her athletic sojourn, with scraps of family secrets sown along the way. Really, it was the writing and structure that made the book for me.

Who would like this book? If you think this is going to be your typical sports-based inspirational story, you couldn’t be more wrong. Girl Runner has great social history wrapped around an unraveling story. It is a book for CanLit lovers as there is something very Canadian about it and Snyder will be one of those Canadian writers I will be keeping my eye on.

P.S. Girl Runner is also published by House of Anansi Press. For me that alone seals the deal on many books.