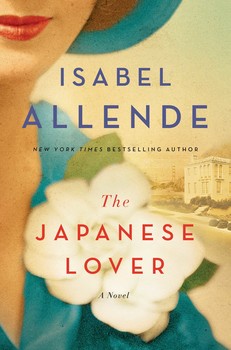 Don’t judge a book by its cover. Seriously, are we back to that old adage? But so, so true. I picked up The Japanese Lover for two reasons: I haven’t read anything by Isabel Allende in years and based on the cover I assumed it was a war time novel set in Japan. I was close. The Japanese Lover is a novel partially set during WWII in San Francisco.

In many ways there could not be a more timely book than The Japanese Lover – Alma, the protagonist, is a Jewish refugee from Poland sent to live with her aunt and uncle in the US. They employ a Japanese-American gardener, who is sent to an internment camp during the war because of the the supposed ‘Japanese threat’. Switch out the nationalities and all of this is starting to sound rather familiar.

As I said, I haven’t read Allende in years, and i remember her being a little more heavy handed, more densely literary. As it turns out, The Japanese Lover is a very pleasant read. Not as challenging as I thought it would be, but it still explores many issues as it switches back and forth from the present day to 1940s California.

Who would like this book? Ah, Christmas is coming and I would say this is a sure fire pick for anyone who likes literary fiction that is not too heavy. By that, I mean, it’s a page turner that won’t bog one down. The themes are incredibly important as many countries are questioning their response to the Syrian crisis. Because of how it deals with Japanese Internment, it is also reminiscent of Requiem by Frances Itani, and Snow Falling on Cedars by David Guterson.