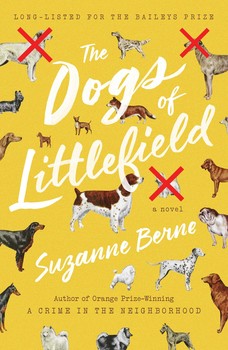 Once again, the first thing that grabbed me about The Dogs of Littlefield was the cover. See? The cover does matter. Flip it over and it would appear that the novel is about an anthropologist doing fieldwork in  Littlefield, one of the Ten Best Places to Live in America, to see what makes it so. The action is centered around a proposed dog park, and opposition to it. That and suburban affairs, teenage angst and evidence that Littlefield may not be the idyll it is purported to be.

Overall, The Dogs of Littlefield is a cute, comedic novel. At times it attempts to do a little more, perhaps act as a commentary of first-world problems, but ultimately, in this regard, it fails. Don’t get me wrong, I enjoyed it. I would recommend it to someone looking for a light read, but it did not rock my world. And I guess I was expecting a little more substance as in the past the author, Suzanne Berne, has been nominated for the Orange Prize.

Who would like this book? The Dogs of Littlefield strikes me as a great vacation read. It is light, without being stupid, and it is entertaining. Though it does raise some interesting points regarding happiness and privilege, it doesn’t require any heavy thinking. In some ways it reminded me of All Together Now by Gill Hornby (review) because both capture small town, middle class life in a comedic way.