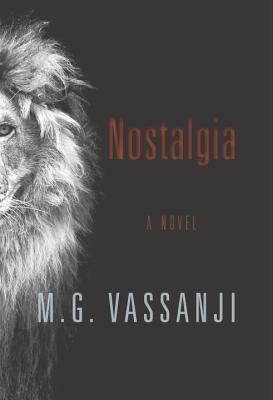 Nostalgia is not your typical Vassanji fare. Quite often his novels move back in time, not so with Nostalgia. It’s a futuristic, dystopian tale – something I never thought Vassanji would do – and it’s pretty great. In spite of it’s setting and time period, it is, in many ways, a classic Vassanji novel. He’s dealing with the same themes – immigration, identity, belonging, but in Nostalgia they are speculatively based instead of factually based.

I’m not really into all this futuristic, dystopian nonsense. It’s not what I naturally gravitate to when I read. So the one thing I really noticed with Nostalgia was Vassanji’s writing. It was parsed down to the bare bones, making Notalgia one of his shorter novels, but it was also masterful. I love Vassanji’s writing, but it truly impressed me in Nostalgia. His use of prose was tipping towards Hemingway in this one.

So what’s it all about? Frank is a doctor of the mind. It’s his job to help people suppress memories from past identities that creep into their current one. It’s also about a world of ‘us’ and ‘them’, the fortunates and the unfortunates, that is eerily real. It’s set maybe 30 years in the future, but it feels much closer.

Who would like this book? I think this book will have much wider appeal than Vassanji’s normal fare. Everyone seems to enjoy speculative fiction these days. But if you want something you can interrogate a little bit more deeply, Nostalgia is a good option. It resonates with so many current events – I’m thinking refugee crises, economic disparities, and generational inequalities to name a few.

Thank you to Penguin RandomHouse Canada for sending me a review copy of this book.