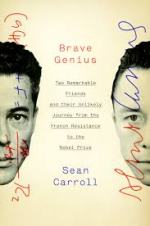 I’ll admit it, the thing that attracted me to Brave Genius was a combination of the cover and the title. As far as titles go, this is a good one. My impression of the book only got better when I read that it was about Albert Camus and his involvement in the French Resistance during WWII. The book also tells the parallel story of Jacques Monod, a biologist, who like Camus worked in the French Resistance. Both Camus and Monod went on to win the Nobel Prize in their respective fields in the years following the war.

The book is basically broken into two parts: Camus and Monod during the war years and their lives and work after the war. I quite enjoyed the first part. The war in France is something I know shockingly little about and Brave Genius did a commendable job at filling that gap. In addition to relaying the lives of these two geniuses, Carroll provides ample context for their actions by really laying out what was happening throughout France in the greater theater of the war. All of the background material is wonderful, but did give me the impression that I was reading a book specifically about WWII in France.

By the time I reached the second half of the book 250 pages later, I was, quite honestly, exhausted. I dove into the second half but was quickly bogged down by the biological details of Monod’s work. Because of the thoroughness of the first part of the book I feared too much detail would follow and gave up on the book. This is not something I do lightly. I would like to stress that Brave Genius is a brilliantly researched and well written tome. As a reader who merely dabbles in non-fiction, usually of a more narrative variety, I found the book to be just a little too much for me.

Who would like this book? There a several obvious answers to this question: 1/ fans of Camus who want greater insight into his life and the effects of WWII on his writing; 2/ Fans of Monod for the same reasons; 3/ those interested int he intellectual culture of Paris and France during the Resistance and the years following the war. Another area that may be explored in the book is what exactly is it about these two men and their circumstances that propelled them to the heights of winning a Nobel Prize? As I did not finish the book I do not know whether or not this is covered, but is certainly something I would be interested in reading about. And regarding Brave Genius‘s status as a DNF – I may return to it in the future when I have more time to dedicate to it. But with the fall book season, there are just so many  things I want to read right now.

I received this book from the publisher via NetGalley in exchange for a fair and honest review.