I don’t think i realized Beautiful Country by J.R. Thornton was a YA title until I started reading it. It certainly wasn’t marketed as a YA read, but the tone and language gave it away immediately. Not that there is anything wrong with that, it’s just that, as you know, i don’t go in for much YA. END_OF_DOCUMENT_TOKEN_TO_BE_REPLACED 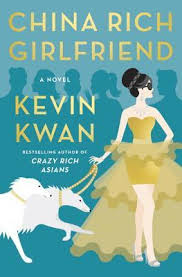 Remember way back in the summer of 2013 when I reviewed Crazy Rich Asians by Kevin Kwan and loved it? Well, Kwan is back with China Rich Girlfriend and it is just as rich and crazy as ever. It’s the perfect summer read – smart, funny and not too heavy. END_OF_DOCUMENT_TOKEN_TO_BE_REPLACED 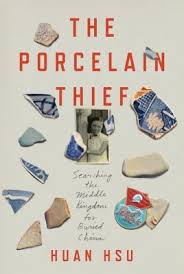 I don’t know why I am drawn to tales such as this one – an individual’s search for their family’s origins – when in actuality, i find the topic of family history rather dull. But The Porcelain Thief sounded truly intriguing to me: an American Born Chinese (ABC) goes back to China to try to find the treasure his great-great-great grandfather buried when the Japanese invaded in the early part of the 20th century. END_OF_DOCUMENT_TOKEN_TO_BE_REPLACED

I think that absolutely everyone who picks up Listen to the Squawking Chicken is going to do so because it is by Elaine Lui aka Lainey Gossip. And I suppose that’s an ok reason to pick it up, but the reality is, this book deserves much more credit than that. It is a humorous and thought provoking memoir about Lui’s relationship with her mother that is filled with insight about both Chinese and Canadian cultures. END_OF_DOCUMENT_TOKEN_TO_BE_REPLACED

Hour of the Rat by Lisa Brackmann isn’t the type of book I normally read (ie. not literary fiction), but sometimes I like to mix it up a little. I must admit that I was initially initially drawn to the book because of its cover. I became more intrigued when I discovered that it was about a female American Iraqi war vet living in Beijing. That kind of breaks the mold of most mystery/thrillers. A little more research revealed that Brackmann’s previous novel Rock Paper Tiger was a New York Times Notable book back in 2010 and was, in fact, on my To Be Read list.

Though the story in Hour of the Rat starts in Beijing, the protagonist, Ellie, spends most of the book travelling to different tourist and industrial locations in China. She is trying to find the brother of one her friends and uncovers the fact that he is an eco-terrorist of sorts. That is not good news in China.

The most engrossing aspect of the novel is the window it gives into the inner workings of post-Communist China. I was fascinated by the descriptions of the newly developed eco-tourist industry catering to both foreigners and young Chinese. It is a different world than that of Cultural Revolution China, and yet somethings stay surprisingly the same. This is complemented by a look into Chinese factories, the plight of farmers and the life of the new ultra rich.

Who would like this book? As I mentioned above, I do not generally read mysteries and find myself unable to evaluate it effectively on those terms. I will say that I found it a little long at times. But I would recommend it highly for its cultural insights into modern China. There are a great number of mystery series out there that are set in foreign cultures and do a magnificent job of immersing the reader in that culture. Donna Leon is famous for her portrayal of Venice, Barbara Nadel does the same thing for Istanbul and John Burdett take the police procedural to Bangkok. Brackmann’s books set in Beijing could certainly be added to this list. Definitely good vacation reading if you are headed to China or prefer armchair travel.