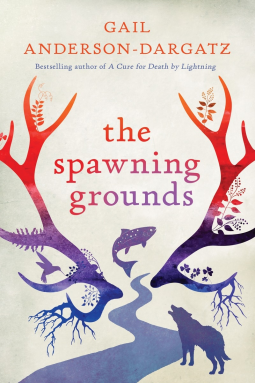 I should probably start by saying that The Cure For Death By Lightning, one of Anderson-Dargatz’s earlier novels, was a real winner for me. I read it a thousand years ago, when it first came out, but i remember reading it in almost one sitting. Then I gave it to my mom and received late night phone calls saying she couldn’t put it down.

The Spawning Grounds is not that novel. Times have changed. I have changed and undoubtedly Anderson-Dargatz has changed.  END_OF_DOCUMENT_TOKEN_TO_BE_REPLACED

Smoke River is Krista Foss‘ first novel. It is set in the vaguely named interlake region of Ontario, in a fictitious settlement that bears a striking resemblance to the Caledonia and Hagersville area bordering the Six Nations Reserve. In recent years, Caledonia has been synonymous with First Nations land disputes, and that sets the scene for Smoke River. END_OF_DOCUMENT_TOKEN_TO_BE_REPLACED

For a novel that could be described as a tale about residential schools and hockey, I was pleasantly surprised. Those are two things that would not send me racing to read a novel. I never would have read Indian Horse by Richard Wagamese if it had not been a Canada Reads pick. That is one of the things i love about programs such as Canada Reads – they take me out of my reading comfort zone and it is usually worth it.

So I did not necessarily love Indian Horse, but I certainly enjoyed it. It is a deeply powerful novel. Oddly enough if you know me, it was the writing about hockey that moved me. Admittedly, I played hockey for three brief seasons during university but that did not spawn a passion for hockey in me. In fact, whatever is going on with the NHL this year is barely a blip on my radar other than to say that The National is never running late because of hockey.

Wagamese’s writing about hockey is breath taking. I was glued to the page, waiting to see elegance would arrive next on the page. Here is a small sample of a hockey scout describing the game.

“Hockey’s grace and poetry make men beautiful. The thrill of it lifts people out of their seats. Dreams unfold right before your eyes, conjured by a stick and a puck on a hundred and eighty feet of ice. The players? …. They’re conjurers.”

Wagamese takes the game of hockey and turns it into something mystical. It really is stunning.

What are Wagamese’s prospects when it comes to Canada Reads? Without having read the other contenders, I would have to say pretty good. This is a story that will appeal to all Canadians. Though chosen to represent British Columbia and Yukon, most of the narrative takes place in other regions of Canada and tells a story that occurred in virtually all regions of Canada.

Who would like this book? Obviously this book is going to appeal to CBC listeners and followers of Canad Reads. That almost goes without saying. Hockey lovers should also count themselves in as ones who would love this book. But I would hesitate to limit Indian Horse‘s appeal to those crowds. For me it was the writing that makes Indian Horse stand out. It was absolutely luscious. I will be keeping my eyes open for anything else Wagamese writes.