My interest in Savage Park by Amy Fusselman comes from the fact that I’m in the middle of a very large project to redevelop the schoolyard at my daughter’s school. This has lead me to learn a lot about different theories of play, child development, and how to manage risk in play situations. END_OF_DOCUMENT_TOKEN_TO_BE_REPLACED 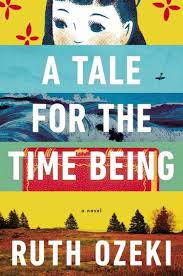 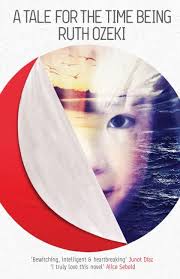 I know! It’s about time I got around to reading the Booker shortlisted A Tale for the Time Being by Ruth Ozeki! I don’t know why I put it off for so long. It’s a book that checks all of my boxes: Zen buddhism, the Pacific Northwest, a lost diary and fleeting references to Proust – yes, yes, yes and yes! And yet, while I really enjoyed the novel, I did not love it and I can finally understand why it did not win the Booker.

A Tale for the Time Being is about Ruth who finds a red diary washed up on the shore of one of the gulf islands in British Columbia. Part of the story is about her life on the island while reading diary, the other part of the story is the diary itself. It belonged to Nao, a Japanese-American teenager forced to move back to Tokyo from California after her dad looses his job. Somehow (the 2011 tsunami?) the diary has made it to the west coast of North America.

I found the parts about Nao to be absolutely captivating. The diary recounts the bullying she experiences at school, her family’s problems and the amazing life of her 104 year old great-grandmother. Unlikely as it sounds, perhaps the most interesting part was the summer Nao spent in a Buddhist monastery with her aged great-grandmother.

Less interesting to me were the parts dealing with Ruth’s life. Perhaps that would have been better served as a framing story, rather than a full half of the book.

Who would like this book? I think A Tale for the Time Being would make a particularly good book club read. There is a lot to talk about, especially when the book delves into more philosophical territory. The book also does a wonderful job at providing glimpses at parts of Japanese life I knew little or nothing about. I was also fascinated by the parts that were about a kamikaze pilot during WWII and the training he had to undergo. My question for you is this: would Haruki Murakami be a good follow up to this book? I’ve never read Murakami (major oversight!), but as Japan’s most eminent writer, perhaps I should.