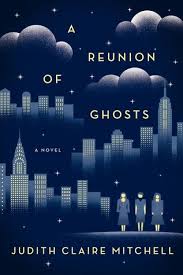 Three sisters sit down to write one suicide note. Welcome to A Reunion of Ghosts by Judith Claire Mitchell. Who knew a book about sisters plotting their own suicide, the development of the gas used in concentration gas chambers and heartbreak could be so funny? END_OF_DOCUMENT_TOKEN_TO_BE_REPLACED 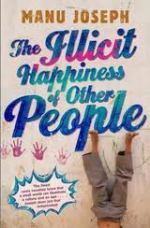 Can I just say that I loved Manu Joseph‘s first novel Serious Men? It was a quirky and intelligent story about a father who forces his son to pose as a mathematical genius. It was wildly different than any other  Indian novel I had read, but still managed to tap into some very relevant themes of modern life in India. So I was excited when I saw that Joseph had a new novel out (December 2012). I didn’t know what to expect, but I was expecting something great and unusual. The Illicit Happiness of Other People, like Serious Men, is a unique novel. Unlike, Serious Men however, The Illicit Happiness is also deeply troubling and a wee bit too philosophical for my liking.

The story focuses on Ousep’s quest to find the cause of his son Unni’s suicide. Three years after Unni’s death Ousep is still questioning and harassing Unni’s friends to see if he can uncover some insight into Unni’s lasts days. Overall, his journey is quite interesting for the reader, unfolding somewhat like a mystery. As Ousep gets closer to the truth surrounding Unni’s last days he discovers that Unni had some unlikely friends and interests. It is at the point that the narrative gets needlessly mired in unusual philosophical discussions. I found myself skimming through long tracts, rather than really reading them. And in the end these philosophical musings may not hold the key to Unni’s death (I will let you decide).

Perhaps as is to be expected, The Illicit Happiness of Other People is a very dark novel. The character of Ousep I found to be entirely unlikable and unsympathetic. Before and after Unni’s suicide Ousep is a drunk who torments his family by periodically getting them to enact with him his own suicide by hanging. He seems to have very little concern for his wife who is quite mad or his younger son.

The other deeply troubling aspect of the novel is they way in which girls and women are viewed as sexual objects. In part what makes this so troubling is that it resonates with my own experience of living in India. However, Joseph delves into this perception much more deeply and poses it as a necessary condition of the South Indian man. Regardless of the general goodness and moral well being of a Tamil man, they are still held hostage to these unavoidable and uncontrollable desires.  This is played out in a number of troubling scenes in which the erstwhile Unni is the ring leader. Unni also plays the role of charismatic ring leader in some other acts of troubling violence. All of this poses a rather grim view of society.

Who would like this book? Thankfully we are passed the days when the sprawling multi-generational family saga is the only thing Indian literature has to offer. The Illicit Happiness of Other People fits into a new trend in Indian literature that is exemplified by the works of Vikas Swarup (of Slumdog Millionaire fame), Aravind Adiga and Lavanya Sankaran (review). These novelist are a little bit more edgy in their approach to portraying the quotidian lives of their characters in modern India. This novel may also appeal to those who enjoyed the philosophical musing found in novels like The Life of Pi by Yann Martel.