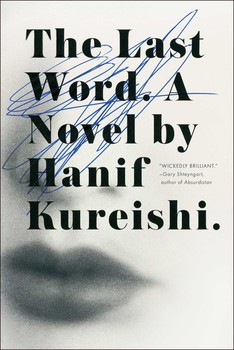 It’s been a long time since I’ve read anything by Hanif Kureishi. In fact, i think the only thing I’ve read by him was the Buddha of Suburbia (brilliant, if memory serves). Along comes The Last Word and I thought, why not? Kureishi is a well-known satirist, and in this book he takes an aging, once-famous author to task.

Unfortunately, I didn’t love the book. I liked it, but I didn’t love it. It is about a young-ish writer tasked with writing a biography of Mamoom Azam, an aging and crotchety writer, modeled in some ways on Salman Rushdie (think womanizer and scandal plagued). All that sounds very promising to me, but in the end I just felt that the whole endeavor was rather misogynistic.

Misogyny in great writers in not a new thing, nor even a bad thing in some cases. That is, a writer can still be brilliant while making me feel icky. But that is not the case with The Last Word. I found the male characters to be completely unlikable, and quite frankly, boring. If you’re going to be a misogynist at least be interesting about it!

Who would like this book? You thought i was going to say misogynists, didn’t you? No. That’s not where I’m going with this. I’ve always been interested in writers and in writers’ lives, and The Last Word scratched that itch for me. It also reminded me so-what of Ian McEwan. I’m not always a fan of McEwan’s work while I’m reading it, but at the end he generally manages to pull things together in a way that impresses me. Kureishi does the same thing in this work.

I received a copy of this book for review consideration from the publisher via Edelweiss.