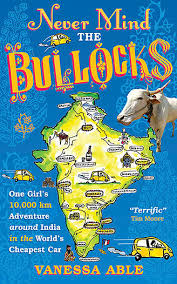 My love of India, and the colorful cover, drove me to pick up Never Mind the Bullocks (also published as The Nanologues) by Vanessa Able. In this book, Able sets herself up with the challenge to drive around India in a Tata Nano, the world’s cheapest car. And perhaps I should have stopped right there. I seemed to have forgotten that I hate car trips; Able, on the other hand, seems to live for them.

Starting in Mumbai, the book recounts her journey down the west coast of India, a blossoming romance takes her part way up the east coast and then she seems to push the pedal to the metal to finish off her journey in northern India, the Himalayas and Delhi.

For all that she has written, I felt that very little about India is actually revealed. To me, she seemed woefully uninformed about much of Indian life, culture and history. And she seems to report most of her encounters with India as though it is an undifferentiated, uniform mass of humanity that is fundamentally different from ‘us’.

Yet she seems to have some awareness of her shortcomings. In the early pages of the narrative she admits that she

felt like a bumbling Englisher, a parachute hack of the worst variety, an opportunist about to contribute nothing but another (fuel-efficient) death machine to the people of India.

In the end I felt that Able not only kept India at an arm’s length, but also herself. I did not come away from the book with sense that she had grown, or that I had learned anything significant about her.

Who would like this book? Able quite clearly loves a challenge, especially if it is of the road trip variety. She has gone on to drive through a number of other countries, something that appeals not in the least to me. But if you like a road trip this may be the book for you. She included much about the vagaries of driving in India, something I am loathe to do.